skip to main | skip to sidebar

A few seconds ago, it was last Saturday and we were stumbling off the plane, and in the blink of an eye, I was (not) stumbling in at 3am Sunday. In between we opened the show, played to enthusiastic houses, ran lines, did makeup, bought props, stuck together, explored solo, sang songs, drank pints, climbed cliffs, ate fish, walked, swam, rode trains, and started packing again. Sigh.

There are wives, boyfriends and kids, cats, guinea pigs and a dragon named Steve at home, but for a week we were Outlook, a new play. This is Outlook: 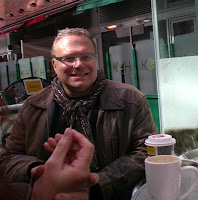 Mark Finley’s been on board since the beginning. Though we’ve known and worked with each other many years on many plays, it’s only the second play of mine he’s directed (people are always surprised to hear that). It’s just that when we work on a play, we work on it for a LONG time. (The evolution of “Off-Season” to “Some Are People,” to “End of Land” took about 4 years).

One of the secrets of our successful collaboration is that we both work in the same building, for the same company (for now). We chat from the 2nd to the 9th floor. We spot each other across the cafeteria and I interrupt his Sudoku time. We meet for a blast of caffeine just before the coffee bar closes. And we run our concurrent theatrical lives over my latest editing deadline and his planning of the huge international event he runs.

We are not getting too old for this shit. We are getting better at it: The Secretaries, And Sophie Comes Too, readings of Careful, Slipping, I Know My Own Heart (all found in Dublin), Street Theater at the Center. Doric’s Celebration of Life.

What he’s taught me is about letting go and trusting… when you KNOW you can let go and trust. This script, this version, came in at 83 pages. We had a 70-minute window. We’d sit in nooks and crannies at work and before rehearsal, slimming it down, line by line, exchange by exchange, and 9 times out of 10, when he said: can we cut this? I said: you’re right. (Though we ARE putting some of it back next time, right Mark?)

It wasn’t so much a negotiation as a passing back and forth, holding up and examining, taking it into the rehearsal room and: yes you’re right…no that does belong there. And we ended up with a play.

Mark is my half-Gemini brother from another mother. And he’s very handsome. 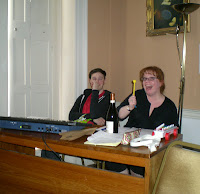 My play is about what happens when a magic wand comes into the picture and changes everyone’s lives. Jen Russo makes the magic happen. Our paths first crossed at the APAC reading of my play “End of Land,” in which she ran a wonderful, efficient gig, and soon after, I noticed that she & Mark Finley were joined at the hip (theatrically speaking) Good call, Mark! After coveting her for many shows, and watching her kick it without breaking a sweat, I finally got to work with her on one of my plays, and I have to say if she weren’t “married” to Mark, (and I weren’t happily married myself) I might have to fight him for her.

We knew the production would be low-tech, and when Mark and I were discussing how to indicate the magic wand was working, I suggested using a xylophone. Jen went down to Toys ‘R’ Us and picked up one of those Fisher-Price models on wheels, with a plastic hammer attached by a string, and each rehearsal, she’d produce a TZINGGGGGG when Susan waved the wand.

Each night as we set up, Jen said: “Sound check!” We’d pause and she’d run the hammer up the notes. Then: “Sound check finished.” The xylophone goes home with her. 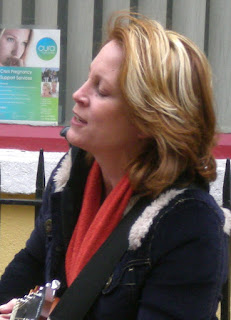 Back at the turn of the century in a hotel in Seattle where the participants in the ROCKRGRL conference were congregating, I spotted two tall women I’d seen play in and went over to introduce myself (again). They were Chapter in Verse, and they were hanging with a much shorter woman, who introduced herself as Meghan Cary from Hershey, PA. “Oh…do you know Shakeys?” I asked. “I went to see Joan Jett and the Blackhearts play there.” Long story. Meghan said that she did know where it was…and asked me to her show.

When she strode onto the stage at a Starbucks a night or two later, she planted her feet and took charge of the audience in such a way I said: ACTOR. Then she started playing and singing and that was it for me. A keeper. And someone I must work with. And later I asked where she’d trained. She seemed surprised, and told me she had both undergrad and grad degrees in acting. When we started En Avant playwrights, she was in “A Bushel of Crabs.” And I’ve summarized elsewhere our long history of short plays, readings, her stepping in to save the day in “Grieving for Genevieve,” and getting married having 2 kids in there (and 3 albums). And now after 12 years, I got to see Meghan originate a part in one of my full-length plays. Because when I see something, I try to make it happen. Sometimes it just takes a REALLY REALLY long time. 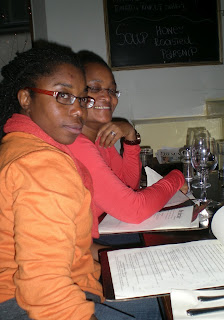 Donnetta has been keeping me honest as a playwright this whole time. Each of the characters has a throughline, and we see what she wants. But Brown, the character Donnetta plays, is more mysterious; some have suggested she’s an entity of some kind. (And generally I leave that sort of thing up to the actor). But as a writer, I know we aren’t quite…THERE…yet with Brown’s sweet spot. And having someone both as smart and grounded as Donnetta helps me as the playwright figure out what’s missing (and until then, she fills in the gaps, beautifully). We talk about the character, and Donnetta tells me what she feels is going on; and what isn’t there for her to find as an actor. And as I said sometime last night, after not one, but two conversations with people who’d seen the show and said: what does Brown REALLY want, I said I can’t decide that in my top brain. I have to put it down in my reptile brain and let it rise to the surface, probably between sleep and waking, or in a dream (which is what I have in common with Brown: she dreams things and tries to capture them and make them happen. It’s what she does). And what Donnetta does. My fleet-footed Palmetto state messenger of the gods, our Thespis. 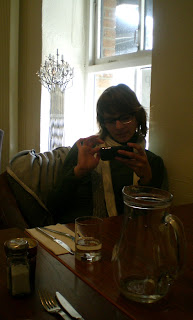 Ironically, Irene is our junior member, but she’s the one who plans, organizes, and cajoles the rest of the gang into getting from here to there, knows about train tickets and has a list of “must dos” that she checks off with alarming efficiency. She’s our ingénue who could run a small country. Or a slightly larger one. Don’t be deceived by her slight appearance, her blonde hair and bubbly laugh. I didn’t know it when we first cast her, but she is so like Ella, her character, that in many ways, all she had to do was bring her essence as she is onto the stage, and we GOT it. But there is a serious craft at work here; and Mark pushed her hard: and she took it all in, and claimed her own space on the stage with a powerful group of fellow players. This is the best work I’ve seen her do. And we have nicknamed her boyfriend Serious Ron (the name of her boyfriend in the play). 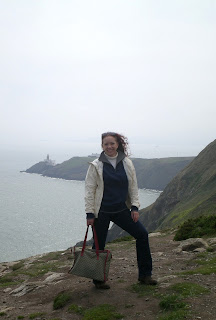 The thing about Danielle is that she seems to transform every time you look at her. At any angle, you say: I didn’t see that before about her eyes, the tilt of her head, the way she’s holding her hands. We’d passed through each others’ orbits at EAT, and the first time we got her in the rehearsal room…then saw her at the Chesley/Chambers reading of “Outlook” (many drafts ago), Mark and I looked at each other and just said: oh yeah. She’s a dancer and you can tell. And as an actor she is just as rigorous on herself as you know she is on her students…though there’s a clear leavening of kindness and wisdom as well. Someone told her last night: you know if the Abbey had seen you do this play, you'd be hired on the spot. Everyone pulls me aside and says: Where did you get her? How did you find someone so right for this part?

Producing
I addressed the troops yesterday (Saturday) in my capacity as producer. I said we needed to spend the day on ourselves and the play. Stay close to home, tend to ourselves. We still had two more full days of work (including the Gala). We’re representing EAT and New York companies, and yes, Americans. We have a job and we’re not finished with it yet.

Among the Epiphanies (and that’s the title of a memoir if ever I heard one) I had this week was that I’m not here to play. I’m here to work. Of course I was always here to work, but since I came out publicly (as a producer), I have had to remind myself that these are producer shoes and hat I’m wearing, not the playwright’s wardrobe. Though I’m constantly diving in and out of phonebooths changing costume.

I look at the actors each time I’m here and think “where do they get the TIME to do tourist stuff?” I’ve got meetings and press releases, and emails and blogs and I look at things on my way places, and talk to people, and listen to their stories, but this is my…fourth or fifth trip here and the list of must-sees I must not have seen is long.

My imaginary assistant missed some things, and I would have fired her or at least docked her pay if she existed. Epiphany: next time bring an assistant. I usually see many shows when I’m here but was torn between that and wanting/needing to see our show. Epiphany: I brought finished shows here before; this is a work-in-progress. I DO need to see it as many times as possible so I know what to work on next.

We did not have the houses I would have liked, though the audiences were enthusiastic. I actually didn’t have much of an epiphany about that one. It keeps me up at night in Ireland and in New York. I’m getting better at this, not so much because it’s a natural skill, but because I like the people I work with, and want to take care of them. Whether they’re the American family or the Irish one, it’s my job to keep them all safe.

Unlike the character of Patience in the play (whose nighttime mutterings I just quoted), I don’t have as much of a problem saying “I love you” to the people I love.

I love them, individually and as a group. They are the ones who said: What’s the big dream…yours? And then said: “Of course.” 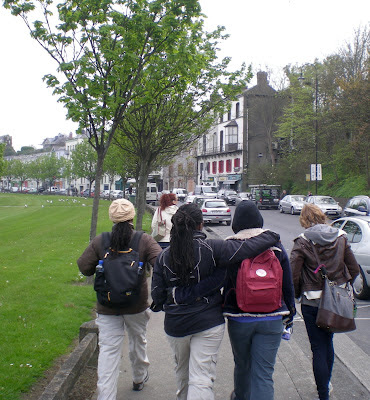 Posted by EATinIreland at 6:43 AM

KW - so happy to read of the Adventures of Outlook - congrats, kudo's to all of you. Give Steve the Dragon a kiss (after Donna, of course) - and take a deep breath. You rock.

Oh - and that last comment was from me in Tennessee!

Linked by Love of Theatre